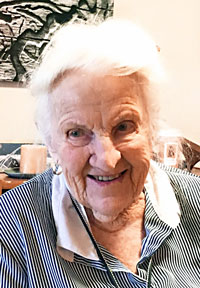 Bernice S. “Sunny” Morse died after a short illness Tuesday, October 29, 2019, at the Chelsea Retirement Community in Chelsea, Michigan. She was 103 years old.   Born in Warren, Pennsylvania, in 1916, Sunny married William C. Morse of Erie, Pennsylvania, in 1937. Sunny and Bill lived for 70 years in Ann Arbor where Bill earned a PhD and became a professor of education and psychology at the University of Michigan. The couple personally built their own home on Penncraft Court in 1944 as part of a cooperative of friends. The cooperative spirit of the court continued over the years to provide a close-knit community for them and their children.

Sunny was active all her life in civic and volunteer service. As part of her work as a lifetime member of the League of Women Voters she monitored the juvenile court system, served on the state board, supporting fledgling local leagues around the state, and registered new voters in the high schools. She volunteered as a tutor of children and as an exercise class instructor for seniors. Her love of learning and dedication to her community work led her to take classes in each of these areas. She had a life-long interest in women's rights and women’s issues in the law and audited legal classes at the university. She also participated in peace vigils over the years.

Sunny often hosted Bill’s students in her home as well as those with whom she and Bill shared deep long-term friendships.

The family lived for 14 summers at the University of Michigan Fresh Air Camp near Pinckney, where Bill was director. As one example of Sunny's special caring for the campers, she baked a cake for every camper who had a birthday while at camp.

As a young woman, Sunny wanted to be an architect and worked for several years at an architectural firm. She took an active role in designing their original home and the various additions over the years. She worked during the Second World War at PRCO and later at Survey Research and Kitchen Port.

Starting in the 1940s, the Morse family vacationed every year in McGregor Bay, Ontario, where they were initially part of a cooperative and later built an A-frame cottage of their own. Sunny and Bill spent several months of the summer there every year until they were in their eighties.

Sunny and Bill sold their home on Penncraft Court and moved together to the Chelsea Retirement Community in 2006. Bill passed in January 2008. In the ensuing years Sunny continued to thrive in the caring atmosphere of this community.

Sunny will be remembered as a beloved mother, grandmother, aunt, and friend, and a spirited woman of great humor, grace, commitment, and intellect. She will be very deeply missed.

There is no memorial service planned at this time. Commemorative contributions may be sent to the Chelsea Retirement Community Benevolent Care Fund or the Michigan League of Women Voters.   For more information on contributions and a chance to share memories and photographs, please visit sunnymorsetribute.com.