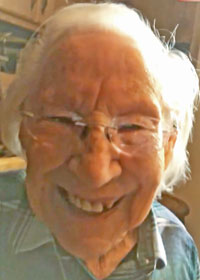 of Chelsea, MI, age 95, died Friday, November 8, 2019 in Jackson, Michigan. She was born September 19, 1924 in Genesee Twp., Michigan, the daughter of Edward & Jane (Gillie) Sanborn. Jean grew up in Rankin, a small town near Flint, Michigan and graduated from Grand Blanc High School in 1942.  After graduation, she worked at the Michigan School for the Deaf in Flint, starting in the business department and working her way up to secretary of the president, Dr. Harley Z. Wooden.  During this time, she volunteered to work with a group of teen deaf girls in the Stepping Stone Program for Self-Improvement sponsored by Mott Foundation of Flint.

Jean started her further education at Flint Junior College, working weekends at a restaurant to pay her way.  She then transferred to Michigan State Normal College (Eastern) when the first program in Michigan for teaching the deaf and hard-of-hearing was instituted.  She received her BS degree while going to school in the daytime and working at Kaiser-Frazer in the accounting office on the afternoon shift.  During her training, she was assistant teacher for a first grade class at MSD.

Jean was the first woman to live off campus at Eastern.  She met and married Edward Lewis on September 23, 1952. She had resided in Chelsea since 1962.  Mrs. Lewis was active in community and church affairs.  She volunteered at Chelsea Hospital gift shop, Meals on Wheels, and the Methodist Home.  She also worked at Ann Arbor Computer Company when the computer was room-sized.  Golf and bowling were her hobbies.  In 1979 she entered the antiques business and thoroughly enjoyed this business for 30 years.  She was a member of the Antiquarians Antique Club in Dexter, MI.

Jean is survived by two sons, Jon of Chelsea, and Brian (Anne) of Traverse City;  1 brother, Robert Sanborn of Gladwin; five grandchildren, Seth (Ai), Caitlin, Matthew, Patrick, and Cameron; 3 great-grandchildren, Claire, Seryu, Selena;  and several nieces and nephews. She was preceded in death by her husband, Edward E. Lewis on Feb. 19, 1992; a son, Steven on May 1, 1980; and four brothers and two sisters.

The family will receive friends at Cole Funeral Chapel on Tuesday, November 12, from 2-4 pm, followed by a funeral service at 4:00 pm.  A private burial will take place at Oak Grove Cemetery, Chelsea. Memorial contributions may be made to Salvation Army or a charity of one's choice.