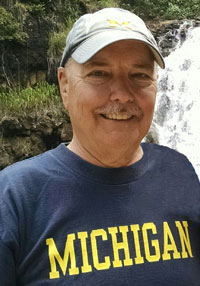 A multi-sport athlete in Wellington, Ohio, Bo went on to play football at Muskingum College where he graduated with a degree in economics in 1968.  While at Muskingum, Bo was president of the Mace club. He was a Mace for life and still of great joy to him was an annual Mace golf outing in West Virginia. Although born and raised in Ohio,  Bo moved his family to Michigan and became an avid U of M football fan, attending games as a season ticket holder for 40 years. Bo was a longstanding member of the Chelsea Athletic Boosters and organized the annual golf outing fundraiser, which was renamed in his honor several years ago and had it’s 28th annual outing this year.
Chuck, as he was known professionally, was Senior Principal in charge of Leisure Time and Real Estate Advisory Services consulting practices in Laventhol & Horwath's Michigan office.  He headed this group from 1983 to 1990. He then started Hospitality Advisors Consulting Group and U.S. Realty Consultants which he was President of from 1991-2019.
Chuck served as Chairman of the Board of the Ann Arbor Area Convention and Visitors Bureau on five different occasions and has served on its board of directors for 20 of the past 35 years.  Additionally, he served on the board of directors of the Ann Arbor Chamber of Commerce for seven years in the 1980’s. Continuing his public service, Chuck served for six years on the board of directors of Chelsea Community Hospital serving two of those years as Chairman in the 1990’s.
He was particularly involved in numerous hotel and conference center development projects andhas conducted seminars on the topic. Chuck developed the Chelsea Comfort Inn and Village Conference Center in Chelsea, Michigan and continues to be an owner. He published “The Lodging Commentary”- a bi- annual publication on the health of the Michigan lodging industry regarded as the resource for the industry in Michigan. Chuck was a member of Michigan Travel and Tourism Association, Vice Chair of the Washtenaw County Accommodations Ordinance Commission, and Board of Directors of Chelsea First.
He is survived by his 3 sons, Bryndon (Holly) Skelton, Colby (Charlotte) Skelton, Rourke Skelton; his partner, Kathy Gunderson, and her sons, Gavin & Ben Gunderson; 6 grandchildren,Schuler, Brier, Sommer, Bo, Mia, and Caden; sister Sandy (Stuart Wills) Piepho; nephews, Matt and Ted; as well as numerous extended family members.
A memorial service will be held Tuesday, July 9, at 4:30 p.m.,  at the Comfort Inn Conference Center in Chelsea.  There will be light refreshments and gathering after the service from 5-8 pm. Memorial contributions may be made to the Chelsea Athletic Boosters.
Click here to view or sign Bo's online guestbook