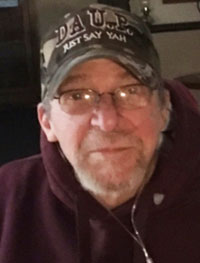 of Jackson, MI, formerly of Chelsea, Michigan Center, and Napoleon, age 68, passed away after a 3 ½ year battle with pulmonary fibrosis on Sunday, June 16, 2019 at his home in Jackson. He was born October 6, 1950 in Ann Arbor, Michigan, the son of Elliot Joseph & Alice C. (Lee) Lounsbery.  Bill lived on Waters Road in Chelsea, then he moved to Michigan Center in '77 & Napoleon in 89.  He  spent 12 years as a painter for Delf Painting in Ann Arbor and 4 years with B & C Painting in Ypsilanti.

On June 28, 1980, he married Kathy Hart in Jackson, MI and she preceded him in death on May 19, 2009. Survivors include two sons, Eric of Michigan Center and Ryan of Napoleon; two daughters, Laura (Jesse) Tedder of Jackson, and Amber Lounsbery of Ann Arbor; one sister, Susan Hale of Lansing;  two grandchildren, Heavan and Patience Tedder; and several nieces & nephews.  In addition to his wife, he was preceded in death by his parents; and two  brothers, James and Thomas Lounsbery.

Funeral services will be held Friday, June 21 , 11 am at Cole Funeral Chapel in  Chelsea, with Rev. Kathy Schell officiating.  Burial will follow at Oak Grove Cemetery in Chelsea.  The family will receive friends Thursday from 4-8 pm.  Memorial contributions may be made to American Cancer Society.