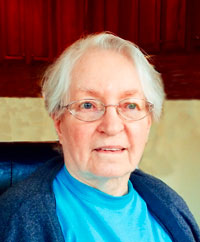 of Chelsea, Michigan, age 83, passed away Friday, April 19, 2019 at her home. She was born November 5, 1935 in Detroit, Michigan, the daughter of Emil & Lillian Elizabeth (Kemp) Alaniva.  Delphine earned her Bachelor's and Master's degrees in education from Michigan State University, and that is also where she met her husband David.  She was a member of Zeta Tau Alpha.  She was an avid quilter and crafter, and was in charge of the 4H sewing group for a few years.  Everyone will remember Delphine's smile.

On June 22, 1957, she married David William Gay in Dearborn, MI, and he preceded her in death on April 26, 2005. Survivors include two daughters, Lisa & David Claus of Chelsea, Lora  (John) Wheeler of Boston, MA; two sons, David (Rebekah) Gay of Forest lake, MN, Alan (Arlene) Gay; a brother, Loyal (Florence) Alaniva of Livonia; 13 grandchildren; 1 great-grandson; and many nieces & nephews.  In addition to her husband, she was preceded in death by two brothers, Howard Alan and Loren Alanson.