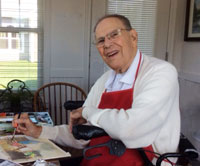 of Chelsea, MI, formerly of Salem, SC; Royal Oak;  Farmington Hills; Fairfield, CT; Mountain View, CA; and Appleton, WI, age 91, passed away peacefully at home Friday, March 15, 2019, surrounded by family. He was born January 5, 1928, in Appleton, Wisconsin, the second youngest of nine children of Joseph & Alma (Flesh) Dohr.  Paul attended Layton School of Art. During WW II he served in the Navy in a Combat Information Center (CIC).  Afterwards he continued his education under the GI Bill, graduating with a BFA from Washington University with a major in advertising.
In corporate life, Paul’s work included freelance advertising design and 32 years with the same company. He started as art director and was promoted to market management and to national account management.  Paul was a past president of Toastmasters.  He also formed an adult enrichment art program for the state of Wisconsin in 1953 and formed the Fox Valley Artist Guild.  He was also a 2nd Degree Knight of Columbus member.   Perhaps Paul is best recognized as a watercolor artist.  He enjoyed many juried art awards, produced several one-man showings, taught watercolor painting, and has permanent collections in South Carolina at the Blue Ridge Art Center in Seneca, at the Anderson Art Center in Anderson, and at the Belton Art Center in Belton.
On June 3, 1989, he married Ellen Haagen in Novi, MI, and she survives. He is also survived by three sons, Paul J. Dohr, Jr. of Livonia,  Thomas J. Dohr of Rochester Hills, and James P. Dohr of Bothell, WA; a daughter, Susan Van Camp of Linden, MI; a sister, Marjorie Palmer of Boulder Junction, WI; four step-children, Elizabeth McGowan of Oviedo, FL, Amy Haagen of Dexter, John Haagen of Anthem, AZ, Meg Haagen of Commerce Township; 20 grandchildren; and 12 great-grandchildren. He was preceded in death by his first wife, Elaine Jansen, and by a daughter, Catharine Perham.
A Funeral Mass will be held Saturday, March 23, at 10:30 a.m. at the Chelsea Retirement Community Chapel with the V. Rev. Dr. William J. Canon Turner officiating.  A memorial service in South Carolina will be held at a later date. Memorial contributions may be made to Arbor Hospice , 2366 Oak Valley Dr., Ann Arbor, 48103. Arrangements by Cole Funeral Chapel, Chelsea.
You may share a memory or leave a message for Paul's family by using the form below.  Please allow up to 24 hours for us to review and post your comment.
{jcomments on}