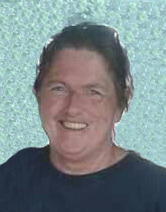 Chelsea, Michigan, formerly of Jackson, age 62, passed away on Tuesday, March 12, 2019 at Henry Ford Allegiance Health in Jackson surrounded by family and friends. She was born on January 5, 1957 in Chelsea, Michigan to  James Robert Brown and Beverly A. (Burmis) Brown.

Cindy worked at Pilot and Eisenhower Center.  She took care of many people when they were sick or going through a tough time.  Cindy was also part of Brain Trainer's group in Ann Arbor.

She is survived by her son, Mike (Tiffany) Smith of Jackson; her daughter, Susan (Marcus Maddock) Smith of Jackson; and her brother, Tim Brown of Munith; five grandchildren: Michelle, Michael, Lilie, Joshua, Victoria and many aunts, uncles, and cousins.    She is preceded in death by her parents, and her siblings James P. Brown and Lori Brown

A memorial luncheon in Cindy's memory will be held Saturday, March 30, 1:00 pm at the Masonic Temple, 355 Napoleon Road, Michigan Center. Burial will be at Maple Grove Cemetery at a later time. Memorial contributions may be made to the cancer research charity of your choice. Arrangements by Cole Funeral Chapel.

You may share a memory or leave a message for Cindy's family using the form below.  Please allow up to 24 hours for us to review and post your comment.