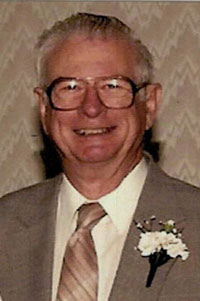 Age 97, passed away Thursday, March 7, 2019 at Hillside Terrace in the company of his family and friends.  He was preceded in death by his parents Ray J. and Fern (Follmer) Lowery, all nine siblings (Alvin Lowery, Marian Mosier, Patricia Nygren, Ray J. Lowery Jr., Joyce Fuller, George Lowery, Dolores Heinrichs, Darrell Lowery, and John Lowery), his wife Beverly Witt, his sons Mike Larkin and Gavin Barclay, and son-in-law Gary Eddings.  Bill is survived by his daughters Patricia (Larkin) Eddings, Cathleen (Lowery) Piccione, and Barbara Tozser; his sons Ray Lowery and David Barclay; his former wife Patricia (Campbell) Lowery; and more grandchildren and great-grandchildren than you can shake a stick at. 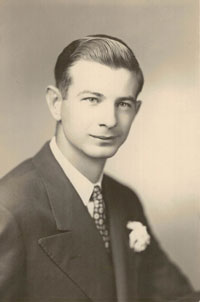 Bill was born August 11, 1921 in Davenport, Nebraska and grew up in the sprawling metropolis of Oak, the third of 10 children, helping work his family’s farm during the difficult years of the Dust Bowl and Great Depression (not that he let those minor annoyances keep him down).  He worked his way through agriculture studies at the University of Nebraska – Lincoln (UN-L), putting those studies aside temporarily to serve his country during World War II flying B-24 bombers out of Lecce, Italy.

After V-E Day, 1Lt. Lowery turned in his uniform to complete his degree in agriculture from UN-L, which may seem odd as he then started a 35-year career managing ground services for United Airlines.  During this time, he also began what he considered his most important job: starting and raising a family with Beverly (nee Witt) and, following Beverly’s passing in 1967, with Patricia (nee Campbell).  He was a loving and caring husband and father to 2, 4, 5, or 7 children, depending on how you want to count them.

Not one to sit idle, Bill also became heavily involved in Civil Air Patrol (CAP) in 1976, serving 32 years alternately as commander of two cadet squadrons (first in Michigan and later in Nebraska) as well as finance officer for CAP’s Nebraska operations.  He also became involved in Lincoln’s Optimist Club as well as being a mentor for children in UN-L’s Teammate Program.  Following his second retirement (for real, this time), he returned to Michigan to enjoy his latter decades with family and friends.  He survived a stroke in 2013 which led to him moving to Hillside Terrace, “starring” in several TV commercials for Hillside, and writing his memoirs and several books of poetry.

Visitation will take place Friday, March 15 from 4 to 8 pm at Cole Funeral Chapel, 214 E. Middle Street, Chelsea, Michigan, as well as Saturday, March 16 from 10 to 11 am at St. Andrew’s United Church of Christ, 7610 Ann Arbor Street, Dexter, Michigan.  A memorial service will follow starting at 11 am.  An informal meal and sharing of memories of Bill will follow in the church’s fellowship hall. A private burial will be at Michigan Memorial Park in Flat Rock.  Bill loved to work in the yard and in the garden. In lieu of flowers, consider an evergreen sapling - to be planted in one of Gramps' kid's yards. Charitable donations in Bill Lowery's memory can either be made to St. Andrew's UCC (at the address above) or to the Optimist Club of Lincoln via Youth Activities Corporation, c/o Treasurer Jerry Salber, 7142 Shamrock Road, Lincoln, NE 68506.  (YAC is a 501C3 nonprofit affiliated with the Optimist Club of Lincoln.)