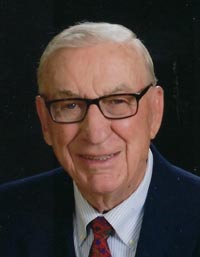 of Chelsea, Michigan, age 88, passed away Saturday, February 23, 2019 at the Chelsea Retirement Community. He was born March 12, 1930 in Lapeer, Michigan, the son of Joy Leonard & Genieve (Colson) Green.   John graduated from Lapeer High School, and attended Central Michigan University, He worked for the Hoover Company for 42 years, beginning as a door-to-door salesman and retiring as National Sales Director.  He was a member of Chelsea First United Methodist Church, the Wm. Mckinley Lodge #431 F&A Masons, AASR Valley of Canton, and the Tadmor Shrine. He was a Life member of the North Canton Elks, a member of the Retired Executive & Professional Men’s Club; and was inducted into the Canton Hall of Fame.

Funeral services will be held Thursday, Feb. 28, 1:30 pm at the First United Methodist Church in Chelsea.  The family will greet friends at the church from 11 am - 1:30 pm. Burial will be held Friday at Metamora Cemetery in Metamora, Michigan.  Memorial contributions may be made to the Shriners Hospital or the Silver Maples Scholarship Fund. Arrangements were entrusted to Cole Funeral Chapel.