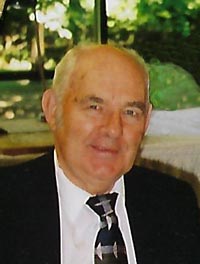 Joseph graduated from Chelsea High School in 1947, then served in the US Army in Germany from 1950 to 1952. He worked at Federal Screw in the early 1950's, where he met Gladys. Joseph retired from Chrysler Proving Grounds, where he worked most of the time in the Brake Lab. Joseph was a former member of North Sharon Baptist Church, and was currently a member of Faith Baptist. He served as the mechanic at church to keep the buses running. Joseph enjoyed working at home, woodworking and gardening. His garden fed a lot of family and neighbors. Joseph led Bible studies at Legacy Assisted Living. He didn’t enjoy games, but he loved helping the kitchen staff at Legacy.

A memorial service will be held Saturday, March 2, 11:00 am at Faith Baptist Church, Chelsea, with Pastor Adam Summers officiating. The family will receive friends at Cole Funeral Chapel Friday March 1, from 4-7:00 pm.  A private burial will be at Sharon Township Cemetery in Manchester.   Memorial contributions may be made to Faith Baptist Church, 4030 Kalmbach Rd., Chelsea, MI 48118, or Great Lakes Caring Hospice, 900 Cooper Rd., Jackson, MI 49202.