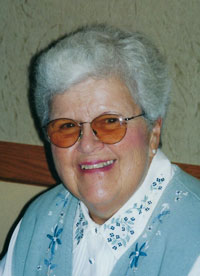 Ruth lived in Ypsilanti for about 50 years until she moved to the Garden Apartments of Chelsea Retirement Community in the 1990s.  Ruth was an active member of First United Methodist Churches in Ypsilanti and Chelsea, where she participated in the United Methodist Women and taught Sunday School for many years.  She was a former President and active member of PEO.  Most importantly, she was a devoted wife and mother.

A celebration of Ruth’s life will be held Thursday, July 4, 10:30 am, at Chelsea Retirement Community.  Burial will be at Highland Cemetery in Ypsilanti, Michigan.  Memorial contributions may be made to Chelsea First United Methodist Church or the UMRC Foundation.  Arrangements were entrusted to Cole Funeral Chapel.