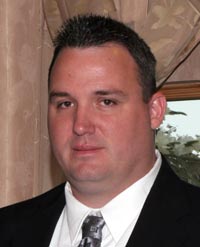 of Pinckney, MI, formerly of Taylor, MI, age 49, passed away Friday, February 8, 2019 at U of M Hospital due to complications from an extended illness. He was born April 18, 1969 in Warren, Michigan, the son of Frank Richard & Janice Eileen (Mitchell) Labut.  Tom graduated from Truman High School in Taylor in 1987, and then attended Lima Technical Truck Mechanic School.  He owned his own small engine repair business, and also drove truck for a while.   He was proud to be a stay-at-home dad.  Tom attended New Faith Chapel in Romulus, and enjoyed racing quads and dirtbikes.  He loved sports, especially the Tigers and attending his nieces' & nephews' sporting events.

A memorial service will be held Saturday, February 16, 2019, at noon at New Faith Chapel, 19478 Middlebelt Rd, Romulus, MI 48174, with Pastors Lance Witham and Matt Mendenhall officiating.  Memorial contributions may be made to Laura Labut to be used for Nolan.  Arrangements were entrusted to Cole Funeral Chapel in Chelsea.