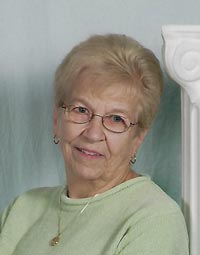 of Chelsea, MI, age 85, died Thursday, January 31, 2019 at her home. She was born February 11, 1933 in Detroit, Michigan, the daughter of Russell & Clara (Colvia) Ferry.  Elaine lived in Chelsea most of her life. She was a member of Faith Lutheran Church since 2008.  Elaine worked at the Chelsea Hardware store, and Dayspring Gifts.

On July 22, 1950, she married Charles “Bud” Hafner  in Brighton, MI and he preceded her in death on Aug. 2, 1996. Survivors include four sons, Lloyd of Munith, William (Janet) of Belleville, Lee of Alabama, Anthony (Deedee) of Munith; one daughter, Carol (Tom) Houle of Chelsea; a brother, Ronald Ferry of Grass Lake; as well as many grandchildren, great-grandchildren, nieces and nephews.  She was preceded in death by a son, Lary; a daughter-in-law, Janet Hafner; and a grandson, Christopher.

Private funeral services will be held at Cole Funeral Chapel in Chelsea, with Rev. Mark Porinsky officiating.  Burial will be at Maple Grove Cemetery.  Memorial contributions may be made to Faith Lutheran Church, 9575 N Territorial Rd, Dexter, MI 48130.