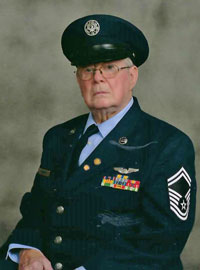 Ray graduated from Manchester High School in 1959. He served in the US Air Force from 1962 until he retired as a Senior Master Sergeant in 1982. Ray began a second career at Chrysler Pentastar Aviation, working there for 15 years. In his retirement, Ray drove a school bus for the Chelsea School District, and taught at the Aeronautical Institute at the Yankee Air Museum. He was a member of Emanuel United Church of Christ in Manchester his entire life. Ray lived in Chelsea since 1982. He had been a member of the Kiwanis Club of Chelsea, where he was Secretary for over 30 years. Ray was recognized for his work at St. Louis Center for Boys, with the Boy Scouts, and for his help at Mott Children’s Hospital. He was a very patriotic American.

On May 28, 1966, he married Patsy Hageman at Emanual U.C.C. in Manchester, and she survives. Other survivors include his son, Mark (Connie) Kemner of Eastpointe; two grandchildren, Abigail and Cameron; two sisters, Beth (John) Ball of Manchester, and Rita (Terry) Salyer of Austin, TX; and a sister-in-law, Doris Kemner of Clinton. He was preceded in death by his parents; and a brother, Carl.

Funeral services will be held Monday, Oct. 31, 11:00 a.m. at Emanuel United Church of Christ in Manchester, with Rev. Dave Bucholtz officiating. Burial with military honors will be at Oak Grove Cemetery in Chelsea. The family will receive friends at Cole Funeral Chapel on Sunday, 2:00-5:00 p.m. Memorial contributions may be made to the VA Ann Arbor Fisher House or the Wounded Warrior Project.

Click here to watch the video of Ray's funeral

You may use the form below to share a memory or leave a public message for Ray's family. Please allow 24 hours for us to review and post your comment.

12
#20 Brian Kidston 2022-11-04 13:04
Ray was a special person in our life. Our relationship was through Chelsea Kiwanis. We first met in 2017 when Margaret and I moved to Chelsea. He was a solid dependable man who through his service personified being a Kiwanian in the finest sense.
Quote
#19 Al and Arlene Hanson 2022-11-01 10:43
Patsy, please accept our deepest sympathies to you and your family. We looked up to Ray and admired him for his generosity and involvement in so many important functions at Emanuel and in the community, always friendly and helpful and always a joy to see him at church. We miss him, with love, Alan and Arlene Hanson
Quote
#18 Gordon Schleicher 2022-10-30 17:22
He served many years as Kiwanis advisor to the Kiwanis Aktion Club a service club for adults living with disabilities at St. Louis Center in Chelsea. Aktion Club members made paper flowers to decorate his room at the Kresge Health Center and they will miss him dearly.
Quote
#17 John Knox 2022-10-30 15:22
Ray was such a wonderful person, always willing to help anyone in need. I've never known anyone to be a more giving person. The world is a better place because of Ray. Thoughts and prayers to Patsy and family. John and Mimi
Quote
#16 Ben Probert 2022-10-29 04:51
Ray will be missed by all that knew him. My condolences for your loss. He lives on in our memories.
Quote
#15 Nancy L Rowe 2022-10-28 18:42
Pat and Ginger and family. I'm so very sorry for your tragic loss. May wonderful memories comfort you. Wish I lived near enough to attend the services but please know you are in my thoughts and prayers! Nanznb
Quote
#14 Sandy Ball -Jenkins 2022-10-28 17:44
Patsy I am sorry for your loss. I pray the Lord will give you comfort during this difficult time.
Quote
#13 Cheryl Lehmann Kroll 2022-10-28 15:33
Patsy,
So sorry to hear about your husband's passing. I'm sure you have many wonderful memories of the years you spent together. Let those sustain you and bring you joy as you remember those cherished times.
Quote
#12 Susan Honeck 2022-10-28 11:39
Patsy my heart is with you in this sad time. Ray was a good man, and he will be missed by many. I'm sending love to you and Mark.
Quote
#11 Jim Randolph 2022-10-28 10:25
A more generous person with his time, I have never met. Ray was kind, selfless, and giving. Many will miss him.
Quote
12
Refresh comments list