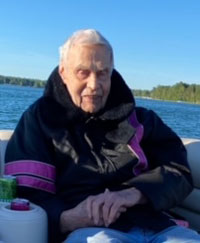 Jerry retired as a Claims Supervisor from State Farm Insurance. He graduated from Plymouth High School, earned his bachelor's degree from Michigan State University, and attended graduate school at the University of Colorado at Boulder.

Jerry lived in Northern Michigan for 45 years, and enjoyed spending time with his family at his up North cottage. He enjoyed exercising daily, as well as golfing, boating, snowmobiling and waterskiing. He was proud of waterskiing for the last time on his 70th birthday. Jerry also enjoyed working crossword puzzles, playing pool, and card games, especially pinochle.

On August 30, 1958, Jerry married Mary Klobuchar in Ann Arbor. She preceded him in death on January 30, 2009. He is survived by his son, Richard Hermanson of Pontiac; daughters, Amy (Brian) D'Aprile of Northville, Cheryl (Thomas) Lyons of Lapeer; four grandchildren; seven great-grandchildren; two sisters-in-law, Esther Cobb, Linda Hermanson; and many nieces and nephews. He was preceded in death by his parents; wife; son, Kenneth Hermanson; brother, Carl “Walt” Hermanson; two nieces; and two nephews.

Graveside services will be held at Mt. Olivet Cemetery in Chelsea, Michigan. Memorial contributions may be made to the Alzheimer's Association. Arrangements were entrusted to Cole Funeral Chapel in Chelsea.

You may use the form below to share a memory or leave a public message for Jerry's family. Please allow 24 hours for us to review and post your comment.