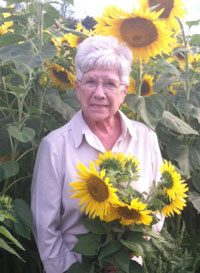 Rose attended Davis and Elkins College after high school where she was a member of the Pi Beta Phi Sorority. After college she moved to Washington D.C. where she met the love of her life, Robert Turner. They were married in October of 1957. They moved to Ypsilanti in 1965 and started an insurance business which they owned and operated for over 40 years.

In 2003, Rose moved to Chelsea with her daughter and granddaughters whom she helped raise. She was a selfless mother and grandmother who always put family above all else. She was a strong woman who endured many tragic losses yet left a lasting impression of kindness and grace on all who met her. Rose will be deeply missed by family and friends. She will be buried in Arlington National Cemetery next to her husband. A memorial service will take place in Arlington in the spring when her ashes are buried. Arrangements were entrusted to Cole Funeral Chapel of Chelsea, Michigan.

You may use the form below to share a memory or leave a public message for Rose's family. Please allow up to 24hrs. for us to review & post your comment.

#7 Sandy Redmond 2022-10-01 15:34
Shelia and Sabrina my deepest sympathy ! She was my special friend with a beautiful heart that so many adored ❤️❤️❤️ She always Brightened my day ! Sending my love to all of you at this tough time and she will forever live in my heart ❤️ Thank you for always sharing her with me ⭕️❌
Quote
#6 Sandy Redmond 2022-10-01 15:26
I am so saddened to hear this news ❤️ She was my amazing friend and I will miss her with all my heart ❤️ She always brightened my day and her kindness was a gift ! All my Love ,,,, Sandy Redmond
Quote
#5 Julie & Owen Ballow 2022-10-01 12:19
Dear Shelia and Sabrina,
Sharing your sadness as we remember Rose.
Gentle Woman.
Gentle Mother.
May the angels welcome her to paradise!
Quote
#4 Elisa Schwall 2022-10-01 11:37
Shelia & family
So very sorry you are going through such a huge loss
Quote
#3 Melissa Mato Lantto 2022-10-01 08:30
“She was a strong woman who endured many tragic losses yet left a lasting impression of kindness and grace on all who met her.” Perfect description of Rose. Sheila & Sabrina you are in my prayers.
Quote
#2 Sheri Laidlaw 2022-09-30 19:41
Kindness and grace, definitely the epitome of what I think of when I think of Rose. Truly one of the sweetest ladies I have ever known and I will miss her so much. Much love to Sheila, Sabrina and all that loved her. ❤️
Quote
#1 Judy & Safu Nana 2022-09-30 14:40
Dear Sheila & family,
We are very sad to hear that your mother has passed away. We remember her very fondly. Please accept our sincere condolences.
Safu & Judy.
Quote
Refresh comments list