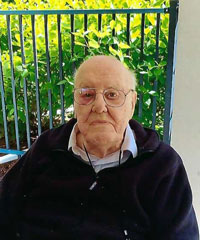 of Chelsea, MI, age 96, died Tuesday, September 27, 2022, at Chelsea Retirement Community. He was born August 2, 1926, in Detroit, Michigan, the son of Daniel Edward & Ruby Mae (Larkins) Schlott, Jr.   Glen went to Cooley High School in Detroit, then worked for Michigan Bell his entire career, retiring in the 1980s.  He was a member of Nardin Park United Methodist Church where he sang in the choir. He was also a member of the Nardiners Senior Citizen group. Glen loved going out to eat at good restaurants.
He was preceded in death by his loving wife of 45 years, Caroline Elizabeth Schlott. He was also preceded in death by his parents; and his daughter, Janet Jaeger. Survivors include a son in-law, Robert Jaeger of Jackson; a grandson, Karl (Nicole) Jaeger; three great-granddaughters, Kaitlyn, Madison, and Mackenzie; and several nieces and nephews.
A small memorial service was held at Chelsea Retirement Community. His ashes will be place in the UMRC Memorial Garden. Memorial contributions may be made to the United Methodist Retirement Communities Foundation, 805 W. Middle St, Chelsea, MI 48118.
You may use the form below to share a memory or leave a message for Glen's family. Please allow up to 24 hours for us to review and post your comments.