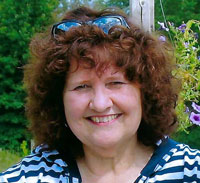 Of Dexter, Michigan. At age 75, passed away after a decade long battle against cancer on Thursday, September 1, 2022 at St. Joseph Mercy Hospital in Ann Arbor. She was born September 26, 1946 in Pikeville, Kentucky, the daughter of Joseph & Lillian (Mullins) Anderson.

Shirley spent many years working in the Chelsea School District. She worked in the lunch room at North Creek and Beach Middle schools, and she retired after several years as a school bus driver for Chelsea schools. Shirley was a member of St. Mary Catholic Church for many years.

The family will receive friends Thursday, September 8, 2-4 & 6-8 pm at Cole Funeral Chapel, with a vigil service at 7:30 pm. Memorial contributions may be made to St. Jude's Children's Hospital.

You may use the form below to share a memory or leave a public message for Shirley's family. Please allow 24 hrs. for us to review & post your comment.

#7 Blake & Judy Fulmer 2022-09-17 11:27
Pat and Taylor family
Our hearts are heavy for you with the loss of such a wonderful soul. It was always nice to visit with Pat and Shirley ..the nicest people Shirley was a hoot ! Our prayers are for your comfort during the hardest times
Quote
#6 Therese and girls 2022-09-08 20:54
Aunt Shirley u will b missed dearly by therese and zandrea and autumn. We loved u dearly u helped us alot and always helping others in time of need. Someday we will meet again when it's time for us.
Love u Aunt Shirley
Quote
#5 Therese and girls 2022-09-08 20:48
Aunt Shirley was wonderful always helping people out in time of need. My girls autumn and zandrea adored her and uncle pat. Like she was a gma to them. She was loved dearly and will be missed. We will c you again when our angels are ready to fly.
Quote
#4 Darlene Johnson 2022-09-08 19:17
Shirley Talyor's Family - Sincere condolences to all of you. Shirley was a joy to work with. She always brought humor to the bus garage. Her smile was infectious. She always knew the perfect "one liner" to fit any uproar at the bus garage. She was just "The Best". May she fly with the angels to a most deserving place in Heaven.
Quote
#3 Katie Curtiss 2022-09-06 18:52
Shirley was a wonderful lady. I was fortunate to have her as a bus driver. Her heart was so big. My condolences to her family.
Quote
#2 Josh Bobo 2022-09-06 11:19
Taylor Family,

I am sorry to hear about the sudden loss of Mrs. Taylor. Our thoughts and prayers are with you all during your time of sorrow. May God wrap you in His love and surround your family with peace and comfort.

I’m so sorry for the loss of your beloved wife and the dearest of sisters.

All my love and prayers for you and your family.