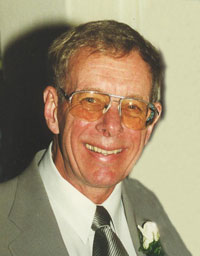 Of Chelsea, MI, formerly of Brooklyn, Grass Lake, & Paw Paw. Age 85, passed away Sunday, August 28, 2022 at Legacy Assisted Living in Jackson. He was born September 6, 1936 in Detroit, MI, the son of George and Wilma (Lancaster) Miller.

Gene graduated from Paw Paw High School. He then earned his bachelors from Western Michigan University and his Doctorate of Dentistry from University of Michigan. He served as a dentist in the US Air Force from 1960-62. Gene moved to Chelsea in 1972, and worked as a dentist in town until his retirement in 2001. He was an active member of the Chelsea Kiwanis Club. Gene enjoyed singing in the church choir, golfing, running, hiking, and traveling, especially with his children to Lake Michigan, and going to the “Blue Dog.”

Funeral services will be held Friday, Sept 2, 11:00 am at the Chelsea First United Methodist Church, with Rev. Joy Barrett officiating. The family will receive friends at Cole Funeral Chapel Thursday from 1-8 pm. Memorial contributions may be made to St. Jude Children’s Hospital.

Click here to watch the video of Gene's service.

You may use the form below to share a memory or leave a public message for Gene's family. Please allow 24 hrs. for us to review & post your comment.