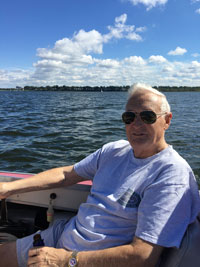 of Chelsea, Michigan, age 84, died Sunday, May 29, 2022, at the Pines in Chelsea, with his family at his side. He was born September 2, 1937, in Ann Arbor, Michigan, the son of Charles King & Virginia A. (Rowe) Hopp.  Ron graduated from Ann Arbor High School class of 1955. He went to work at Eastern Airlines in 1956, and worked there until they closed in January of 1991. Ron then got his Real Estate License and worked for Chelsea Reality. He worked for Motorwheel Corp. in Ypsilanti before moving to Florida in 1997. Ron worked for Ocean Reef in Key Largo, FL until his retirement in 2007. He was a member of St. Mary Catholic Church in Chelsea. Ron was also a member of the Chelsea Senior Center and volunteered with the meals on wheels program at the Pines. He enjoyed spending time with his family, hunting and fishing.

On September 21, 1957, he married Karen H. Beck in Ypsilanti, and she preceded him in death on July 23, 2013. Survivors include a daughter, Brenda (Michael) McGhee of Chapin, SC; a son, Ronald (Yvonne) Hopp of Chelsea, MI; a brother, David (Joyce) Hopp of Adrian, MI; 4 grandchildren, Chet (Bethany), Nichole (Kenny), Trevor, Shannon; one great-grandchild, Oliver; and many nieces and nephews. He was preceded in death by his daughter, Jacqueline, and his sister, Nancy Compton.

A Funeral Mass will be held Friday, June 17, 11:00 a.m. at St. Mary Catholic Church in Chelsea. Burial will be at Marble Park in Milan, Michigan. Memorial contributions may be made to American Cancer Society. Arrangements were entrusted to Cole Funeral Chapel. Special thanks to St. Joseph Mercy Home Care and Hospice and nurse Ben Seymour who was always there for Ron and his family.

Click here to watch the video of Ron's service

You may share a memory or leave a message for Ron's family using the form below. Please allow up to 24 hours for us to review and post your comments.

#2 Sherry Powell 2022-06-17 18:16
Ron will be missed at The Pines. Always a smile and a kind, positive word. Had hoped he would make it to another garden season, he loved fresh tomatoes. R.I.P. Ron, I'll miss you.
Quote
#1 Dave & Penny Trinkle 2022-06-03 19:31
Mr. Hopp was a kind, sweet man who loved his family
very much. He was a great story teller and always welcomed us when we were around him. Much love and sympathy to our dear friends the The Hopps.
Quote
Refresh comments list