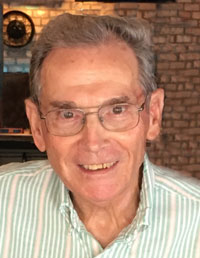 Age 92, of Port Charlotte, FL, formerly of Chelsea, MI, died Friday, May 6, 2022 at Venice Hospice House. He was born March 28, 1930 in Gilboa, Ohio, the son of L.D. & Hazel (Rager) Hermon. Milan was an active member of the Chelsea First United Methodist Church. He volunteered at the Chelsea Retirement Community, Faith In Action, Red Cross Blood Drives, and Lee Memorial Hospital in Ft. Myers, FL. Milan moved to Chelsea in 1975 from Lima, Ohio where he and Kathryn had resided for many years. He moved to Florida after Kathryn died.

On March 7, 1953, he married Kathryn R. Baumgartner in Pandora, Ohio, and she preceded him in death on November 8, 1994. In addition to his wife, he was preceded in death by his daughter, Karen McCuaig; his daughter-in-law, Mary Hermon; and wife Shirley Hermon.

A private graveside service will be held at Oak Grove East Cemetery in Chelsea, Michigan. Memorial contributions may be made to First United Methodist Church, 128 Park Street, Chelsea, MI 48118. Arrangements were entrusted to Cole Funeral Chapel in Chelsea.

You may share a memory or leave a message for Milan's family using the form below. Please allow up to 24 hours for us to review and post your comment.