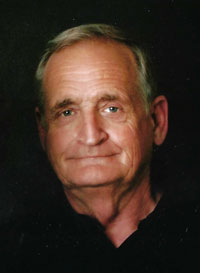 of Latham, IL, age 77, passed away on Sunday, February 13, 2022 at his daughter's home in Chelsea, Michigan. He was born June 23, 1944 in Decatur, Illinois, the son of Anthony W. & Beulah M. (Howard) Colebar.  Clay was an Army Veteran, serving in active duty from 1962-1965. He lived in Latham, IL, and was a self-employed carpet installer for 50 years, finally retiring at the age of 70. He loved his family, friends, and especially his grand/great grandchildren, so very much. Clay enjoyed electric trains and putting models together. He would spend hours working on his giant electric train layout, complete with towns, cars, people, trees, mountains, tunnels, bridges, and lakes. He also enjoyed old war and western movies, and his tomato garden.
On May 29, 1970, he married Gloria Waddell, and they were married for over 51 years. He is also survived by a daughter, Jacqueline (Michael) Manahan; 2 sons, Lt. Col. Wes (Angie) Colebar, Tony Colebar; sisters, Leona Kemball-Cook, Elaine Cavanaugh; grandchildren, Lily, John & Vivian Manahan, Noah and Will Colebar, Brandon Colebar; great granddaughter, Katie Newton; and many nieces, nephews, brothers-in-law, and sisters-in-law. He was preceded in death by his parents, and older brothers, Howard and Kenneth. Clay will be greatly missed by everyone who knew and loved him.
A private celebration of life will be held at a later date. Memorial contributions may be made to the Latham Volunteer Fire Department, PO Box 78, Latham, IL 62543. Arrangements by Cole Funeral Chapel, Chelsea, MI.
You may use the form below to share a memory or leave a message for Clayton's family.  Please allow up to 24 hours for us to review and post your comments.