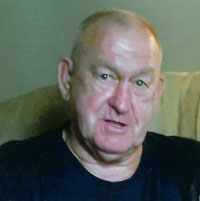 Ollie was married to Gunda (Feulner) Henman for 56 years. She preceded him in death on October 26, 2018. Survivors include a daughter, Kathryn Ryan of Allegan; a step-son, Jesse Henman of Vandercook Lake; a step-daughter, Sharon (Mike) Schoendorf of Michigan Center; and many grandchildren and great-grandchildren. He was preceded in death by a son, Timothy Salyer, a daughter, Karen Jordan, and a great-grandson, Micah Anthony Aldridge.

According to his wishes, no services will be held. Arrangements have been entrusted to Cole Funeral Chapel, Chelsea.

You may use the form below to share a memory or leave a message for Ollie's family. Please allow up to 24 hours for us to read and post your message.

#2 John Porter 2022-01-17 11:08
I liked Ollie a lot. He was a good man and a solid hard worker. Worked with Ollie his whole time at chelsea lumber. R I P Ollie
Quote
#1 Elizabeth Flint Blos 2022-01-12 18:51
Ollie was a cousin. He had kept in contact with my mom Shirley Flint up until a few years ago. My thoughts and prayers are with the family.
Quote
Refresh comments list