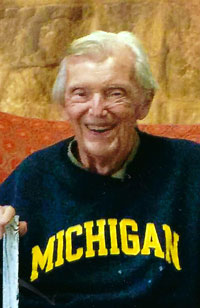 Formerly of Ann Arbor, Michigan, age 90 passed away Sunday, January 2, 2022, at St. Joseph Mercy Hospital in Chelsea, Michigan. He was born on April 7, 1931, in Grand Rapids, Michigan, the son of Russell and Hildreth Daane.  Dick grew up and attended high school in Plymouth, Michigan and after graduating in 1948 he went on to attend the University of Michigan where he received a B.A. in English Literature in 1953 and a law degree in 1955.He had a distinguished career in the law. Dick was in private practice in Detroit, Michigan where he also served as Dutch Consul. As Dutch Consul he received a civilian award for chivalry, the Order of Orange-Nassau in 1971. Dick eventually accepted the position of general counsel at the University of Michigan, a position he held for seventeen (17) years. Perhaps his greatest achievement during his tenure as general counsel was his appearance and argument before the United States Supreme Court in the case of Regents of the University of Michigan, Petitioner v. Scott E. Ewing where he won a unanimous decision.  As a university attorney Dick was a member of the NACUA, a national association of college and university attorneys. He was elected president of the association in 1984.

Dick was an avid outdoorsman, a life-long love that he passed along to his sons. Dick bow hunted with Fred Bear before bow hunting became fashionable. He fly fished for both fresh and saltwater species on four separate continents. Dick owned a series of very good bird dogs with whom he chased grouse and woodcock with his best friend of thirty (30) years, Judge George Alexander.  Because of his outdoor interests Dick was also an environmentalist. He was on the board of the Anglers of the Au Sable, an organization whose mission is to protect the Au Sable River system. In 1995, Dick received the organization’s prestigious River Keeper’s Award for his pro bono representation of an environmental trust in litigation opposing drilling in the Pigeon River watershed. He was also elected to the Angler’s Hall of Fame. 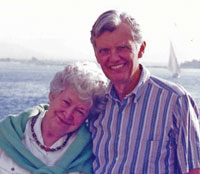 Details about a public memorial service are pending at this time.  Memorial contributions, in lieu of flowers, may be made to Anglers of the Au Sable, P.O. Box 200, Grayling, Michigan, 49738.

You may use the form below to share a memory or leave a message for Dick's family. Please allow up to 24 hours for us to review and post your comments.

#6 Suzy Morse 2022-02-01 13:23
Dick was a dear friend to me and my late Mom, Sunny, at the Chelsea Retirement Community. He was kind to us and so very interesting to talk to. I feel so lucky to have known him. My thoughts are with Maryann and his family.
Quote
#5 Robert Moenart 2022-01-10 11:41
I knew Dick at the University, a fine man and gentleman. Condolences to his family and friends

.
Quote
#4 Dave & Margie Conlon 2022-01-07 12:54
We are so sorry for your family’s loss. Our prayers are with you.
Quote
#3 Tony Duerr 2022-01-07 11:00
Sorry to learn of Dick's passing. I was associated with him in the practice of law in the '80s & '90's. He was a superb mentor and a lucid, persuasive writer. He had a beneficial effect on my professional life on more levels than he likely appreciated.
Quote
#2 Dennis williams 2022-01-07 10:41
depest condolences great compasionate man.
Quote
#1 Tina Zimmerman 2022-01-06 06:58
I came to know Dick because I was chaplain at the Chelsea retirement community. What a wonderful human being. I am so sorry for your family's loss. Peace and grace. Chaplain Tina.
Quote
Refresh comments list