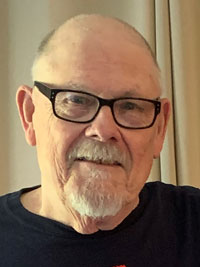 Rodger was a 1962 graduate of Grand Haven High School. He then went on to Muskegon Community College, the University of Michigan, and finally Eastern Michigan University, where he received his Masters degree. Rodger taught in the Ypsilanti School District, and in the autistic program in Garden City Schools, retiring in 2004. He was a hunter and fisherman, and enjoyed going to their condo in Oscoda, MI. Rodger came to know the Lord in 1983, and his faith was very important to him. He sang in the choir and taught Sunday School in several different churches. Rodger enjoyed spending time with his family, especially his kids and grandkids.

On June 20, 1970, Rodger married Eugenia “Geanie” Federici, and she survives. He is also survived by two daughters, Angela (Bobby) Pratt of Spring Arbor, Elizabeth Searl of Chelsea; three grandsons, Micah Pratt, Dominic Searl, Jesse Pratt; and several nieces and nephews. He was preceded in death by his parents, and his sister, Fern Gray.

You may share a memory or leave a message for Rodger's family using the form below.  Please allow up to 24 hours for us to review and post your comments.

12
#13 Patty Faletti 2022-01-13 19:03
He was one of the most caring, loving, story-telling men I ever knew. He was my Pepe. His physical presence will be missed tremendously, but the twinkle in his eye and the joy in his soul will remain in my mind and heart always.
Quote
#12 Cynthia L. Miller 2022-01-10 10:57
My heart hurts at the loss of Rodger; husband, father, son, brother and uncle. I have so many fond memories of him but the first that comes to mind is of him in High School with his friends. His Mom would make Chef Boyardee pizzas for a slew of high schoolers all sitting around her table or in the knotty pine basement. Laughter, jokes and assisting a 3rd grader (me) with school projects highlight my memories, as well as his piano playing and athletics. Or returning from hunting rabbits with his Dad, Harold, bundled up and covered in snow. He was a good uncle to a little kid and a good man to his family. I know he will be missed. Rest gently, Rodger, and blessings to family and friends in the days ahead.
Quote
#11 Steve Raeburn 2022-01-06 22:56
We join with you in your mourning, but rejoice with you for where Rodger is today. He was a great teacher in Sunday School. He liked to make you think. He will be missed. We love you.
Quote
#10 Janet Raeburn 2022-01-06 18:16
So very sorry to hear this! Rodger had an amazing smile and I appreciated it when he taught Sunday School. We will miss him.
Quote
#9 Marcia White 2021-12-31 11:54
Genie and family, I was blessed to know Rodger and always enjoyed my time spent with him.Thankful to have known him. I am so sorry for your loss.
Quote
#8 Kevin Weiss 2021-12-29 13:20
I will miss my Brother but he is in a better place. Roger was a mentor and good friend.
Quote
#7 John and Val Posegay 2021-12-28 18:26
Geanie, our heart goes out to you and your family.
We were blessed to have had Rodger be a part of our lives and enjoyed his humor and conviction.
Quote
#6 Denise Gooding 2021-12-28 10:56
Rodger was a good man and a godly man! He cared for the staff he worked with at Burger and put their safety first! His character and commitment to his faith was a drawing force. So blessed to have known him!
Quote
#5 Alex Bogue 2021-12-27 18:56
I was a Burger student. Roger was always super nice. God bless you all!
Quote
#4 Ann Salyer 2021-12-27 08:20
I always enjoyed Rodger’s perspective in Bible Study. Prayers for the family.
Quote
12
Refresh comments list