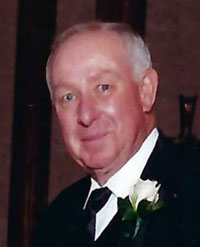 of Chelsea, Michigan, formerly of Ann Arbor, age 84, died Wednesday, September 29, 2021, at Michigan Medicine in Ann Arbor. He was born September 3, 1937, in Chicago, IL, the son of Charles Vernon & Eleanor (Woodbury) Corliss.  Gregg attended Bloom Twp High School and graduated in 1955. He was a business major and obtained his bachelor's degree from Valparaiso University and his MBA degree from Northwestern University. He served in the US Army & the US Army Reserves. Gregg joined the Northern Illinois Gas Company, then in 1983 moved to Michigan Gas Utilities in Monroe. After corporate retirement, he taught marketing classes at Eastern Michigan University College of Business for 17 years. He was a part of the American Gas Association & several other utility associations.

Greg was an avid golfer. He also loved baseball and was a Cubs fan all his life, but became a Tigers fan after moving to Michigan. Greg was very athletic. He enjoyed playing baseball on several corporate teams and as a devout Michigan sports fan, held season tickets for Wolverines football and basketball for many decades. He was also an animal lover and eastern bluebird enthusiast.

A celebration of Gregg’s life will be held at a later date. Memorial contributions may be made to the Humane Society of Huron Valley, 3100 Cherry Hill Rd., Ann Arbor, MI 48105. Arrangements were entrusted to Cole Funeral Chapel in Chelsea.

You may use the form below to share a memory or a leave a public message for Gregg's family. Please allow 24 hours for us to review and post your comment.