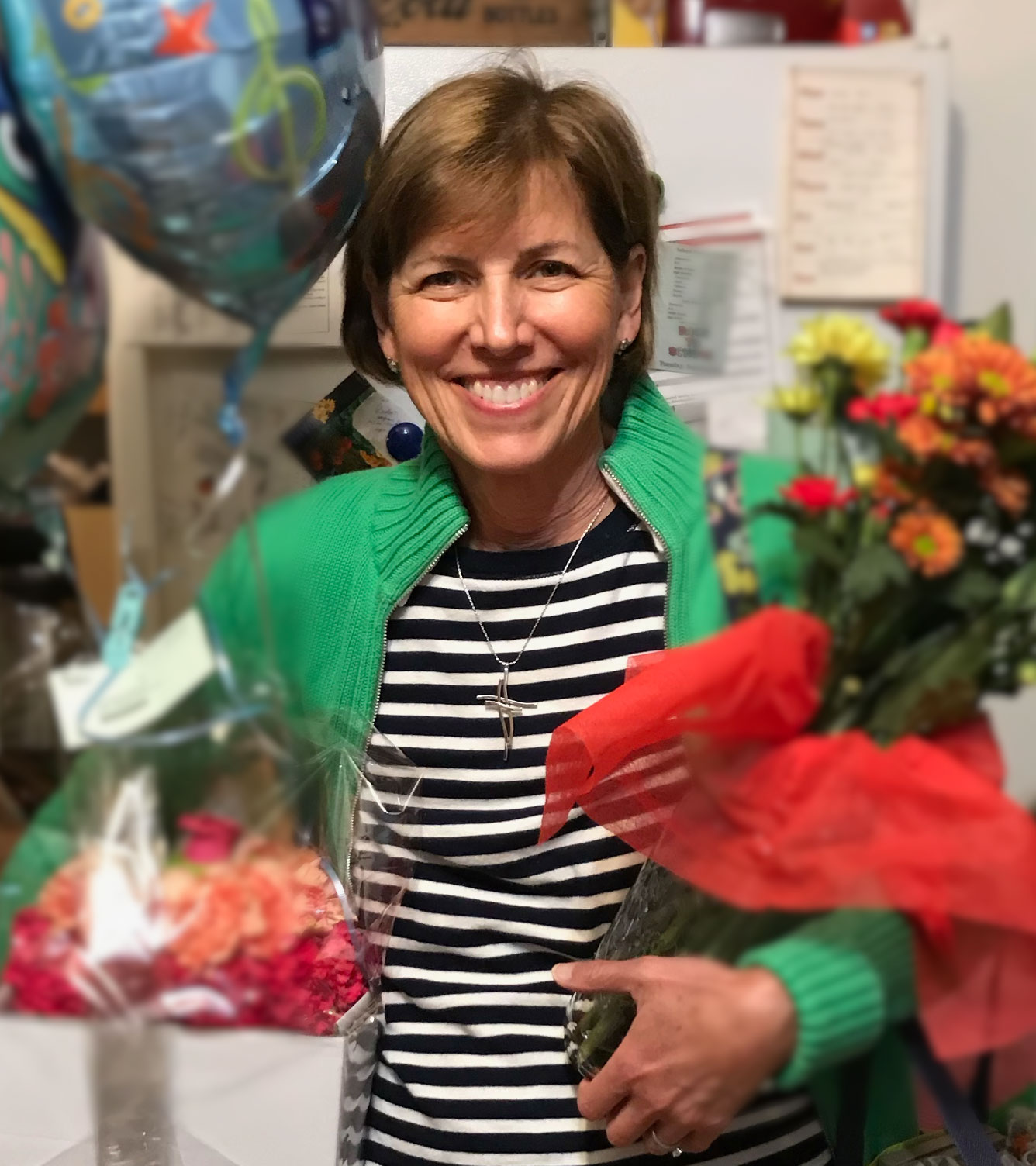 Gwyneth Slocum Bailey of Ann Arbor, MI died peacefully on August 10, 2021 at her home, surrounded by the love and presence of her family. Gwyneth, the youngest of eight children, was born on October 10, 1954 in Bryn Mawr, Pennsylvania to Catherine and Richard W Slocum. Her mother was an avid pilot and distinguished by being one of the first female pilots trained for service in WWII. Her father was the CEO of the Philadelphia Bulletin, which had the largest circulation of any evening newspaper in the United States, President of the American Newspaper Publisher's Association / News Media Alliance, and President Eisenhower’s envoy to post-WWII Europe. Gwyneth’s maternal grandfather, William H. Luden, invented Luden’s cough drops and several other candies and chocolates.

Gwyneth moved many times during her childhood, but spent all four years at Langley High School in McLean, Virginia. She also started to attend Young Life where she committed her life to Jesus, gladly changing her life’s mission and course. She departed to Stanford University in 1972.

While at Stanford she became involved in InterVarsity Christian Fellowship, where she grew in her understanding of God’s word and call to share Jesus’ love with others. She also met her future husband, Fredrick Scott Bailey, while on that journey. Gwyneth first got to know Fred while giving him an interstate ride after final exams. He ended up driving her car and when she realized he’d gotten even less sleep than she had, she plied him with questions about his life story for the remainder of the journey in an effort to keep him awake at the wheel.

After graduation in 1976, they independently joined InterVarsity staff, assigned to Cal. State University, Chico and other campuses. After they worked intensively together there for a year, Gwyneth left to become night manager of the landmark Hotel St. Francis in San Francisco. But the seeds of love had been planted and Gwyneth and Fred married July 29, 1978.

One of Gwyneth’s life verses, which she inscribed on Fred’s wedding ring and restated as she planned her Celebration of Life memorial service, was Psalm 67:1-2:

May God be gracious to us and bless us

and make his face shine on us—

so that your ways may be known on earth,

your salvation among all nations.

After five more years working with InterVarsity at Chico State and four years managing the front desk of the Plaza Sierra Inn in Sacramento and earning her MBA in Information Systems from UC Davis,

they took their growing family to Vienna, Austria in August, 1985. Their son, Justin, had been born in August, 1982 and their daughter, Erin, would be born in Vienna, January, 1986.

Their ten years in Austria (1985-1995) saw them develop deep personal friendships and help start national student movements and develop national leaders across central-eastern Europe as the iron curtain crumbled and fell. Gwyneth was a sought-after speaker to university groups and mentor to young women and men. She also was a trainer for an Austrian consulting firm for a time, while leading Bible studies for Austrian and expatriate women, raising a family and hosting groups of 50 students one or more times a week in their apartment.

After a transition year in Vancouver, BC and a move to Ann Arbor, Gwyneth began her 25-year career at the University of Michigan, where she worked with the Center for the Education of Women and then as Associate Director of Admissions (traveling extensively in Europe and the US) and Associate Director of Career Development for the Ross School of Business. Helping people to find and flourish in their callings, while connecting deeply with others, was her passion and gift to 1000’s of students and others.

Gwyneth loved to swim, travel, create and enjoy beauty, and play with her grandkids. She loved to meet and connect people and share their stories. But most of all she loved and trusted God, including arguing with God about things that didn’t seem right or that hurt, even as she continued to the end in daily study of the Bible and praying prayers of intercession and gratitude. And she regularly invited others to consider and enter into a relational journey with God in light of Jesus’ life, sacrifice and promises for all people.

Gwyneth continued to connect and invest in meaningful and important relationships, even until her final days. These spanned from childhood to friendships from around the world, including WALEO, Stanford Soul Sisters, IVCF, IFES, Austria, Michigan Ross Business School, Swim Buddies, cancer community, and Knox Church.

Gwyneth is preceded in death by her parents and her sisters Judy and Sancha. She is survived by her husband, her children, Justin Slocum Bailey and Erin Luden Bailey Naguib, and her children-in-law, Alexis Mary Bailey and Nicolas Mueller Naguib. “Omi” is also survived by four loving grandchildren, each of whom had a special relationship with her: Ronen Lewis Bailey, Eva Lorraine Bailey, Liesl Bailey Naguib, and Blitz Fredrick Kamal Naguib. She is also survived by her siblings, Richard (Beverly), William (Emmie), Wings (Bob) Benton, Susan (Scott) Critzer, and Jennifer (Michael) Steele, and her cousins Elsa (Heinz) Stimmelmeier, Jonathan (Diane) Luden, and William (Marcia) Luden.  In addition, she is survived by her sister-in-law Bonnie (Gordon) Ward and her numerous beloved nieces and nephews.

Memorial contributions may be made to:

#6 Peggy Carroll 2021-09-07 21:02
Gwyneth was an inspiration to so many of us; she traveled her journey of life with faith and courage and hope. I will miss her wonderful smile and will cherish always the last time we hugged.
My thoughts and prayers are with all of you, her precious family.
Quote
#5 Nancy Jean Lapekas 2021-08-24 20:29
When I moved from Grand Rapids area to Ann Arbor, I was so afraid I would not know anyone. One of the first persons that I met at Bible Study at Knox was Gwyneth. From the first sincere hug that night as she welcomed me to the area, to one of the last as she was with Hospice, I rejoiced that I had met her. She embodies all that a Person should be in their life. A love of Family, God, and of course all her Friendships. When I was diagnosed with Breast Cancer in March of 2021, it was Gwyneth, who was by my side, guiding me along with our Lord. She knew so many People and she left so many lasting impressions. She will be truly missed. Blessings to her Family in the days ahead.
Quote
#4 Rob+GinnyChristopher 2021-08-24 17:43
When Fred departed our idyllic college boys' sanctuary in Manzanita Park that Summer of 1975, I had no idea he would marry such a phenomenal woman from a most accomplished family. There is little doubt we should give Gwyneth all the credit for his complete turnaround into a worthy husband, father and grandfather! Ginny and I are greatly saddened by her far-too-soon departure from this life. Fred and family, do take comfort that the intensity of your feelings of love and loss at this challenging hour is yet another wondrous gift of life from her to each of you. Most Sincerely,
Quote
#3 Ronald Larson 2021-08-22 22:59
I had the pleasure of working with Fred on a pastoral search committee for over 3 years, and spoke with, and prayed with and for Gwyneth on multiple occasions. Fred and Gwyneth have grown to be very special in my heart. The grief I feel at losing Gwyneth from this life are tempered by the knowledge that she fought the good fight with courage, tenacity, and grace, placing her faith in a Savior who has now taken her glory and joy unsurpassed. May God comfort her family and loved ones.
Quote
#2 Doug Oles 2021-08-22 17:47
What a wonderful life. So much to celebrate!
Quote
#1 Christiane Morejon 2021-08-20 16:21
My family had the pleasure of first meeting Gwyneth’s daughter, Erin, and her husband, Nick Naguib, and we immediately became friends and eventually had the pleasure of meeting Gwyneth and Fred. Gwyneth radiated warmth and godliness. I was blessed to see Gwyneth at Liesl’s birthday party. She clearly adored her family evidenced by her beautiful smile, giving spirit, and approachable manner.
Quote
Refresh comments list