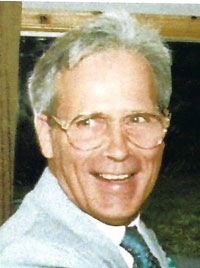 of Chelsea, Michigan, died peacefully on July 12, 2021 at the Chelsea Retirement Community. Born in Albany, NY on October 8, 1927, he was the youngest son of Albert Tatum and Martha Ann (Tew) Davis. He is preceded in death by his three older brothers, David, Albert, and Donald.
Gordon’s beloved wife, Christine, died in 2017. They were childhood sweethearts and were devoted to each other their entire lives. He is survived by daughters Shelley (Fred) Van Kempen, Pamela (Glenn) Illian, and son Andrew Davis, as well as 4 grandchildren and 3 great-grandchildren. Gordon was a lineman and hotstick foreman at Niagara Mohawk for 40 years. He was a member of the International Brotherhood of Electrical Workers, retiring in 1986 after fondly being sent off by his guys at a memorable retirement dinner.
He was a member of the Bethany Reformed Church in Albany, New York, where he served as an Elder and Deacon.
Gordon’s passion was the Adirondacks Mountains of NY.  Most childhood summers were spent there, running wild and barefoot with his brothers while his mother periodically rounded them up for a meal or to break up a fight and his father was off surveying, most notably, the famous Blue Line boundary of the Adirondack Park.
Gordon was a deer hunter, although he often said he preferred watching them instead of shooting them.  He spent many years hunting and hiking with his father, uncles, brothers, cousins and friends in the Long Pond area, first at the old Davis campsite and later at his own hunting camp on the back bay of Hoel Pond near Saranac Lake, NY.  He bought the land there in 1973 and built his camp, with the help of family and friends. What started out as a hunting camp turned into a gathering place for all seasons and helped everyone stay connected and close.
Our Dad was a big-hearted man. There’s nothing he wouldn’t do for a friend.  He was persistent and loyal, an explorer, a puzzle lover and problem solver and an eternal optimist.  He leaves us with a lasting legacy of stories, memories and pictures.
The family wishes to express their gratitude for the compassionate, skillful and tender care the staff at the Chelsea Retirement Community gave our father.  It brought us great comfort.  Please send donations to the UMRC Foundation Team Support Fund, 805 West Middle St.  Chelsea, MI 48118.
A memorial service will be held on Friday, July 16th at 11:00 am at the Chelsea Retirement Community Chapel with Rev. LeAnn Seto officiating.  Burial will be at Saratoga National Cemetery in Schuylerville, New York.  Arrangements were entrusted to Cole Funeral Chapel.
You may use the form below to share a memory or leave a public message for Gordon's family. Please allow up to 24 hours for us to review and post your message.