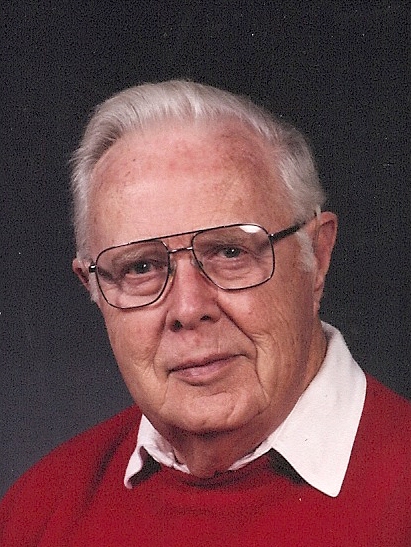 Fred graduated from Wilmett High School, Il., and attended Northwestern Military Academy in Lake Geneva, Wisconsin. He attended Michigan State University, majoring in Agricultural Engineering, and while there he met the love of his life, Mary Jane Riker.  They were married Jan. 31, 1942 in Pontiac, Michigan.   During WWII, Fred served in the Army Air Corps.

Fred was always active in local United Methodist Churches, including Manchester UMC, Westside UMC, North Lake UMC, and Frankfort UMC. He was involved in Frankfort Kiwanis Club, Manchester Optimist Club, and Ann Arbor Masonic Lodge, and was active in Boy Scouts, as a cub scout, boy scout, and as a leader.    He worked at Argus Camera, where he received patents for a film projector and a lens polishing process.   Later he worked for AA Products in Manchester; was Vice President of Dairy Queen International, and finally retired from Malloy Lithographing, where he was Vice President in charge of Human Resources.  After his retirement, Mary Jane and Fred enjoyed their retirement home on the Platte River.  He is remembered by his family and friends as a fair-minded gentleman with unquestionable principles.