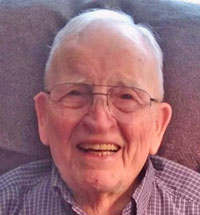 Jack Douglas Lawrence was born in Ypsilanti, MI on January 17, 1924, to Pearl F. (Gibbs) Lawrence and Therlo C. Lawrence. Jack attended Ypsilanti Public Schools. He was captain of both the football and baseball teams his senior year. After graduation in 1942, he attended what would become Eastern Michigan University. He also worked at the Willow Run Bomber Plant for a short few months before enlisting in the Marines on February 13, 1943. He earned the rank of Corporal, was a rifle sharpshooter, and aircraft mechanic. He served in the Southwest Pacific Area from February 29, 1944, to August 22, 1945. Jack participated in the consolidation of the Northern Solomons and Philippines Operations.

After being honorably discharged on October 25, 1945, he returned to Ypsilanti and resumed his education. Jack earned BA and MA degrees in Education. It was at EMU that Jack met his future wife, Joan Marie Keys. They married on February 2, 1952, and in the next nine years, he became the lucky father (his words) of five daughters. They raised their family in Ypsilanti. Jack was an elementary school educator for almost twenty-eight years; twenty-five of those in Ypsilanti Public Schools as a fifth grade teacher at Erickson Elementary School. He retired in 1981 and enjoyed many long years of retirement; spending time with his family and friends. He loved playing golf, especially at Raisin Valley in Tecumseh. Jack was a loving and devoted husband, son, father, grandfather, and great grandfather.

Jack donated to many charities during his lifetime. The family asks that anyone wishing to donate in Jack’s memory do so to a charity or cause of their choice.

The family requests that masks are worn and social distancing be observed inside the church and the Freighthouse.

You may use the form below to share a memory or leave a message for Jack's family.  Please allow up to 24 hours for us to review and post your comments.

#4 Joni Kearney 2021-05-04 19:34
Sending love to Martha & Simon(my friends)and entire
and entire family. What a lovely tribute!
Quote
#3 Susie Owen 2021-05-04 15:54
In reading your Dad’s obituary, it was obvious he was an amazing and accomplished individual. Loving husband, a great dad, an educator of so many students and a man who served his country; all wrapped up in one very special person. I’m truly sorry for your loss, but know that someone that special will always remain in your hearts.
Quote
#2 Warren & Janet Swart 2021-05-04 08:20
Warren and I are so sorry for your loss. Sharing grandchildren with Jack and Joan has been a pleasure.We have enjoyed being with them for all the celebrations. We have missed them the last couple years as health failed. They will both be remembered fondly.
Quote
#1 Kahle/Sue Strickland 2021-05-04 01:55
Our heartfelt sympathy and love to your family. What a beautiful life your parents had; thinking of you all!
Quote
Refresh comments list