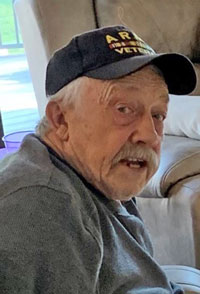 of Stockbridge, Michigan, age 74, died Thursday, April 22, 2021 at St. Joseph Mercy Hospital in Ann Arbor, Michigan. He was born September 24, 1946 in St. Thomas, Ontario, Canada, the son of Robert and Isabell (Wilson) Collin.
Richard graduated from Mackenzie High School in 1966. He served in the US Army from 1966-1968. He was a boiler operator for Ford Motor Company for 35 years in Dearborn, Michigan.

Richard enjoyed golfing, hunting, fishing, vacationing with close friends, driving his truck, and being on his tractor. He loved spending every minute he could with his family at their cabin in Mio, Michigan where he would teach his grandchildren to fish and appreciate the outdoors. He also enjoyed riding his golf cart around the lake visiting with the neighbors and hanging out in the barn.

He married the love of his life, Jeannette Perkins on June 8, 1968, and she preceded him in death on December 9, 2015. He was preceded in death by his sister, Heather Collin. Richard is survived by his daughter, Candita Collin (Jeffrey Cook) of Manchester; two grandchildren, Amber Morseau (Dominic Luff) of Skandia, Michigan, Mark Morseau of Ypsilanti, Michigan; a great grandson, Dakota Luff; two brothers, David Collin (Jill) of Stockbridge, Michigan, and Scott Collin of Grayling, Michigan.

A private celebration will be held in June. Memorial contributions may be made to the American Diabetes Association. Arrangements by Cole Funeral Chapel, Chelsea.

You may use the form below to share a memory or leave a public message for Richard's family. Please allow 24 hours for us to review & post your comment.