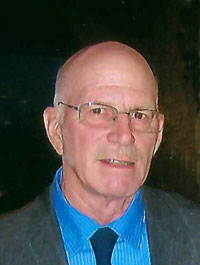 of Chelsea, Michigan, age 73, passed away peacefully on Saturday, April 24, 2021 at Henry Ford Allegiance Hospice in Jackson. He was born February 22, 1948 in Ann Arbor, the son of Edward L. and Virginia “Ginny” (Utsler) Sayers, Sr.  Craig graduated from Ann Arbor High School in 1966, and took classes at Washtenaw Community College. He worked as a mechanic for several years, and then became a project manager for R W Mercer in Jackson, retiring in March of 2012.  Craig bowled in several bowling leagues at Chelsea Lanes, Belmark, and Colonial.  He completely restored his ‘55 Chevy and was active with Chelsea Classic Cruisers. He was a Boy Scout leader with Troop 425.  Craig was a youth baseball coach in Chelsea, and enjoyed watching baseball, never missing one of Brian’s games.  He also enjoyed fishing, golf, camping and traveling.  As a handyman, he could fix anything, and his tools and projects were always neat and organized.
On June 29, 1968, Craig married Linda Bauer and she survives. He is also survived by a son, Brian (Leigh Ann) Sayers of Albion; two brothers, Mark (Liz) Sayers of Wylie, Texas, Edward “Mickey” Sayers, Jr. of Chelsea; a sister, Susan Sayers of Plano, Texas; and several nieces and nephews.
Graveside services will be held Thursday, April 29, 11:00 am at Oak Grove East Cemetery on Freer Road in Chelsea, with Pastor Keith Worrell officiating.  The family will receive friends at Cole Funeral Chapel Wednesday, April 28, but due to COVID restrictions, we are asking people to call the funeral home at 734-475-1551 to schedule a time to come to visitation.  Memorial contributions may be made to Chelsea Baseball or Albion Baseball.
Click here to watch Craig's graveside service (20 minute video)
Click here to watch a slideshow of Craig's life
You may use the form below to share a memory, or leave a message for Craig's family. Please allow up to 24 hours for us to review and post your message.

With golf league starting I'll be missing of Craig every Thursday. Especially his big old smile and his sense of humor over a cold beer at Thompson's after our rounds. I won't be able to make it to the service tomorrow, but I will be with you all in spirit. You will be in my thoughts and prayers.
Quote
#9 Patti Goe 2021-04-27 00:49
Linda,
So sorry to learn of Craig’s passing. I know he will be greatly missed. Will always remember his big smile when anyone noticed his Chevy when you brought it to the reunion. Keeping you in my thoughts & prayers.
Patti
Quote
#8 Lynn Ketzel 2021-04-26 20:47
Linda,
I am so sorry to hear of your loss. Hugs to you and you family.
Quote
#7 Barbara Foster 2021-04-26 20:26
Linda, I am so sorry to learn of the death of your husband. Praying for your family and you

From your UMI friend, Barbara Wilson Foster
Quote
#6 Ben Gunderson 2021-04-26 20:25
Very sweet obituary. Brain and Linda, I’m sorry for your loss. I remember that Chevy sign up in the garage and that’s the first thing I think of when I think of Craig. He was a kind and gracious man and that is a tradition well carried on in Brian. RIP, Craig.
Quote
#5 Tom & Diana Short 2021-04-26 14:40
Our thoughts and prayers are with you and your family. We always enjoyed being with the two of you at all of our class functions. God bless and keep you safe.
Quote
#4 Rod & Kathy Powers 2021-04-26 13:00
Linda, Brian & family,
We are so sorry to hear of Craig's passing. He was always so supportive of Brian & loved attending his sporting events. May the wonderful memories you have help you through the difficult times ahead.
Quote
#3 Sandy Ball-Jenkins 2021-04-26 12:17
Linda, I am so sorry for your loss. I will pray that the Lord will give you and Brian comfort in the days ahead.
Sandy
Quote
12
Refresh comments list