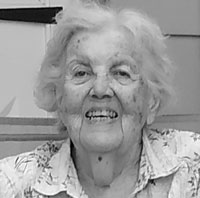 of Tecumseh, MI passed away on Monday, April 12, 2021. Joan was born in Detroit, MI on February 17, 1930 to Erma (Allport) and Roy Keys. When she was five, the family moved to Belleville, MI where she attended Belleville Public Schools. Joan was an accomplished singer and enjoyed singing in school theatre productions and dances, at weddings, and at her father’s Masonic Lodge. After graduating from Belleville High School in 1947, she attended Eastern Michigan University and earned a BA degree in education. While there she met her future husband, Jack Lawrence. They were married February 2, 1952 and raised their five daughters in Ypsilanti.

Joan worked as a substitute teacher, paraprofessional, and volunteer in the Ypsilanti Public Schools. She loved to play the organ and complete crossword puzzles.  Joan was a great friend to many; both young and old. Joan and Jack enjoyed playing cards and traveling with their friends. After Jack’s retirement, the couple moved from Ypsilanti to Clinton and eventually to Tecumseh.

Joan was a loving and devoted wife and mother. Her twelve grandchildren and three great grandchildren were her pride and joy. Nothing brought her more happiness than a visit or a phone call from one of them.

A devout Catholic, Joan found comfort and strength through her faith.

The family is grateful for the care Joan received from Home Instead of Adrian and Elara Caring of Adrian.

Cremation has taken place and a Catholic funeral mass and burial is planned for this summer. Joan donated to many charities during her lifetime. The family asks that anyone wishing to donate in Joan’s memory to do so to a charity or cause of their choice.

You may use the form below to share a memory of Joan or leave a message for her family.  Please allow up to 24 hours for us to review and post your comments.

My heart goes out to you and your family. Please know that you are all in my thoughts. I wish you peace and comfort during this this difficult time.

Today, I’ll be making a donation to the Huron Valley Humane Society in honor of your dear Mother.