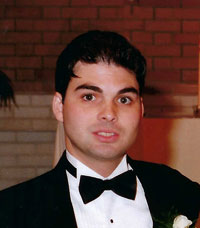 Of Dexter, MI, formerly of Ann Arbor, age 54, went to be with the Lord after a brief illness on Thursday, April 15, 2021 at St. Joseph Mercy in Ann Arbor. He was born August 4, 1966 in Garden City, Michigan, the son of David Charles & Joyce Victoria (Tate) Misner.

Chris graduated from Ann Arbor Pioneer in 1984, and from Michigan State University (where he studied Political Science) in 1989. He worked for Hope Network in Jackson, Park Center in Ft. Wayne, IN, and then at St. Joseph Mercy Hospital - Chelsea, Behavioral Heath for the past year. Chris enjoyed baseball. He had a lively personality, and was loved by family and friends. Chris was very smart, and well educated about history and politics.

Survivors include his mother of Dexter; his father in Shelby Township; a brother, Peter Misner of FL; and two nieces, Emily and Paige. He was preceded in death by his grandparents; a half brother, Matthew, and his cousin, Christopher.

You may share a memory or leave a message for Christopher's family using the form below.  Please allow up to 24 hours for us to review and post your message.

#10 Ellen 2021-04-19 16:28
Chris was the oldest of my 6 nephews and still much too young to be gone. I didn’t get to spend the kind of time you would like to with a family member because of the miles between. Chris was extremely intelligent and very interesting. Any girl that knew him had to envy how he was able to stay so young looking. Love you Chris and give your bother and cousin a hug and kiss for us
Quote
#9 Cathrina 2021-04-18 19:41
Chris is and will always be my favorite person. I was fortunate enough to have had Chris as my closest friend for the past 15 years. He was kind, helpful, thoughtful, smart, extremely funny and a great listener. I will miss our long conversations about life, our many jokes, his laugh, his humor and his smile. He was such a positive and bright spot in my life and I can't imagine the days ahead without him, but I am so grateful for the many years of our friendship. I am a better person because of him and he influenced my life in many ways. I will miss him more than words can describe. Many prayers and thoughts to his family and mom, Joyce. You raised a wonderful son.
Quote
#8 Kim Wresr 2021-04-18 11:29
I feel sad and shocked that Chris is gone. He was such an interesting and fun person with vast knowledge about so many things. I told him I needed to write some of the things down because I would never be able to remember what he was educating me about. He was easy to talk with and laugh with. I will miss joking around with him and the friendly banter of teasing each other. He wanted to drive this stretch of roadway to see the HOLLYWOOD sign and now he is free and flying high to all the destinations. Fly High Christopher Lee you will always be remembered for the amazing person you were.
Quote
#7 Peter Levine 2021-04-17 23:15
I also graduated with Chris at Hazelden Grad School. I Agree with all the comments left here. Smart, funny, kind. A generous and genuine soul. He will definitely be missed.
Quote
#6 John Bayerl 2021-04-17 19:18
I also knew Chris from MSU. As fellow Ann Arborites we shared stories of growing up in A2 durning the late 70s. Not super close after graduation, but when whenever or paths would cross in recent years, we would fall easily back into comfortable conversations as of we’d been best friends for years. He will certainly be missed. Heartbroken.
Quote
#5 Sherry Vogel 2021-04-17 19:07
I am grateful for the time we were given to work with Chris on the behavioral health unit. What a brilliant mind and talent. In the fourteen months I got to call him friend and colleague, he has given me so many fond memories. Laughter, arguing over politics, irritating me with his playlist and him enjoying every minute of it. He could always laugh at himself and the sparkle in his eyes and wink when he thought he was getting one over on me or winning a friendly debate was priceless. Gosh he is so missed already. He helped so many patients, especially those dealing with addiction. I'm glad he was part of our hospital family because we are all better for knowing him. But, it sure hurts we don't get to have him for years to come. I hope he is at peace and playing fantasy baseball! Sending caring thoughts and hope for comfort to Joyce and all of Chris's family.
Quote
#4 Anonymous 2021-04-17 18:57
Eternal rest grant into him, O Lord! May he rest in peace!
Quote
#3 Peter Misner 2021-04-17 18:22
Brother, you will be missed. We are all saddened that you've left us before your time. Thanks for everything you've done over the years to help care for our Mother.
Quote
#2 John Klavon 2021-04-17 08:37
I met Chris at MSU and we quickly clicked. Chris was my college roommate at MSU for a few years. We shared lots of laughter over the years. Chris' knowledge of many subjects always amazed me. Chris will be missed. Heartbroken.
Quote
#1 Joe Culver 2021-04-16 22:38
I graduated with Chris at Hazelden(Now Hazelden/Betty Ford) Graduate School of Addiction Studies. We we were roommates and spent many an hour talking about classes, professors, and yes politics. I was always so jealous of how he fit in anywhere he went. He was liked by everyone who went to school with him, and interned with him. I will miss him.
Quote
Refresh comments list