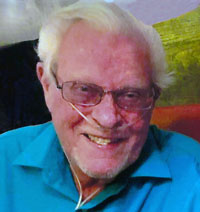 of Chelsea, Michigan, formerly of Chagrin Falls, OH, age 81, died Monday, March 1, 2021 at home surrounded by his family, after a long battle with pulmonary arterial hypertension and scleroderma. He was born August 15, 1939 in Detroit, Michigan, the son of Theodore Oswald & Ruth (Leverenz) Berlinski.  Jim graduated from Lutheran High School in Detroit, and then Concordia River Forest, IL. He was the principal at St. Matthews in New York City, and then he worked in finance for Ford for 30 years, retiring from the Walton Hills Stamping Plant. Jim was the former President of “Apollo's Fire”, the Cleveland Baroque Orchestra, where he sang professionally. He was a music director for many churches, including Gloria Dei, Detroit, St. Paul's Farmington, St. Paul's Northville, Our Redeemer in Solon, OH, Lord of Life in Bainbridge, OH, and Valley Lutheran in Chagrin Falls, OH. Jim attended Peace Lutheran Church in Ann Arbor most recently. He enjoyed bowling and golfing.
On August 24, 1963, Jim married Carole Marie Schankweiler in New York, NY, and she survives. He is also survived by a daughter, Lynn (William) Cottrell of Chelsea; a son, John (Deanna) Berlinski of Geneva, OH; a brother, Donald (Elaine) Berlinski of CO; three grandchildren, Joshua (Samantha), Katlin (Joe), Chrissy; and several nieces and nephews. He was preceded in death by his brother, Gary, and sister-in-law, Karen.
No services will be held at this time. Memorial contributions may be made to Peace Lutheran Church, 8260 Jackson Rd, Ann Arbor, MI 48103, Elara Caring Hospice, 900 Cooper St, Jackson, MI 49202,  or the charity of your choice. Arrangements were entrusted to Cole Funeral Chapel, Chelsea.
You may use the form below to share a memory or leave a message for Jim's family.  Please allow up to 24 hours for us to review and post your comments.

#1 Julie Williams 2021-03-10 18:19
It was always a joy singing with him in cleveland lutheran acappella choir. I'm sad for the family's loss - he was a wonderful and generous musician.
Quote
Refresh comments list