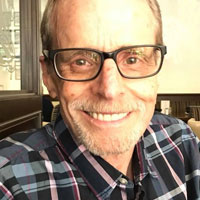 Of Chelsea, Michigan, age 74, died Thursday, February 25, 2021 at his home in Chelsea. He was born August 31, 1946 in Oak Ridge, Tennessee, the son of Paul & Eunice May (Woltz) Ramsey.
Fred graduated from Muncie High School in Indiana, then attended Ball State University. He served in the Army Infantry as a helicopter door gunner from 1964-65 during the Vietnam War. Fred worked for U of M for 15 years, and was a self-employed carpenter. He worked for Chelsea Architectural Millworks, with whom he helped restore the Michigan State Capital building. Fred was a leader in Chelsea Boy Scouts for many years. He enjoyed restoring their historic home in Chelsea, and he enjoyed traveling locally in his Honda Shadow.
On December 27, 1978, he married Donna Rhea Stone in West Palm Beach, Florida, and she survives. Other survivors include his son, Andrew (Rita) Ramsey of Manchester; his sister, Linda Ramsey of New Mexico; his grandson, Samuel Ramsey; and a niece, Tammi. He was preceded in death by two nephews, his parents, and his brother, Paul Jr.
A memorial service will be held in the summer. Memorial contributions may be made to Faith in Action of Chelsea. Arrangements by Cole Funeral Chapel.
Your may use the form below to leave share a memory or leave a message for Fred's family. Please allow up to 24 hours for us to review and post your comments.