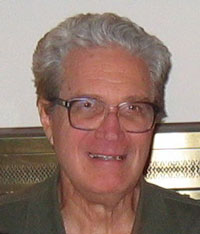 Albert's life took him from small-town Iowa to a career in data analysis at a leading center of population studies. He loved sports, first in basketball and baseball at tiny Boxholm High School, then in baseball at Iowa State University, and later in recreational softball and as a fan of University of Michigan sports and the Detroit Tigers. While at Iowa State, he earned a doctorate in sociology and then went on to teach sociology at Drake University.
Albert always enjoyed new technology, including hi-fi equipment and radio-controlled model planes. Technology led him to his true career in computer programming and data analysis, first as a computer pioneer at Drake and then with the University of Michigan's Population Studies Center. His favorite projects were establishing a learning center in Nepal, and starting an innovative business focused on advanced social data analysis tools.

Private services will be held. Burial will take place at Oak Grove East Cemetery, in Chelsea.
In lieu of gifts, memorial contributions may be made to Doctors without Borders. Arrangements by Cole Funeral Chapel, Chelsea.

Please use the form below to share a memory or leave a message for Albert's family.   It may take up to 24 hours for us to review and post your message.

#2 Sarr Blumson 2021-02-28 11:40
I didn't know Al well, but the memories are good ones.
Quote
#1 Bob Schoeni 2021-02-25 18:27
I was a graduate student in the population studies center while Al was leading computing. I benefited from him being on the cutting edge of computing during a period of rapid technological change. He was always kind, respectful, and curious. I enjoyed connecting with Al after I graduated at the annual Population Association of America meetings. A wonderful human being.
Quote
Refresh comments list