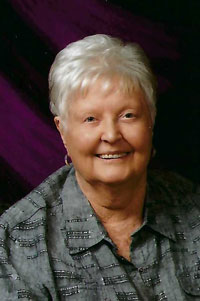 Of Chelsea, Michigan, age 91, passed away peacefully Wednesday, January 27, 2021, at her home, surrounded by love. She was born December 3, 1929, in Ann Arbor, the daughter of Lee & Sylvia (Williams) Ferguson. Marjorie owned Uptown Antiques in Chelsea for many years. She and Bob were the majority owners of Chelsea Lumber. Marjorie was proud to be a farm girl who attended a one-room school house through the 8th grade. She then attended Chelsea High School, graduating in 1947. She could drive a tractor at the age of 13. Marjorie paid for her senior year of college at EMU by raising ducks. She graduated from EMU with a degree in Art History. Marjorie was a descendant of John Williams who was the founder of Webster Township and Webster Church.

She supported many charities, including the Chelsea Historical Society, Chelsea Community Foundation, the Purple Rose, Cancer Society, and the Humane Society of Huron Valley. Marjorie was a strong, caring, thoughtful person who touched a lot of people in quiet ways.  She loved the game of golf, and was very good at it. Marjorie played at Inverness and at Hilton Head. She had an uncanny knack of evaluating other people’s golf swing. Marjorie loved to work in the yard and created a beautiful garden. Her Washington Street home was featured on house tours for many years.

On December 21, 1950, she married Robert Daniels in Chelsea, and he preceded her in death on September 1, 2012. Survivors include three children, Jeffry (Kathleen), John (Donna), both of Chelsea; and Jodi Daniels of Chelsea and Mt. Pleasant, SC; 8 grandchildren; 6 great-grandchildren; and two brothers, Jay (Bonnie) Ferguson, and Donald (Anita) Ferguson. She was preceded in death by her sister, Thelma.

A private service has been held. Burial took place at Oak Grove Cemetery in Chelsea. In lieu of flowers, memorial contributions may be made to the Chelsea Historical Society, 128 Jackson Street, Chelsea, MI 48118. Arrangements were entrusted to Cole Funeral Chapel.

You may use the form below to share a memory or leave a message for Marj's family.  Please allow up to 24 hours for us to review and post your message.

My sincerest condolences.
Quote
#1 Mr. & Mrs. Ball 2021-01-28 23:42
Dear Jeff , Miss Kathleen and the entire Daniels family. With such heavy hearts we are so sorry of the loss of your Mother. Heaven most certainly gained another angel. Please know you will all remain in our continued thoughts and prayers, if you need ANYTHING you just call. We love each and everyone of you !!
Love ,
Billy , Sarah , Christina , Frankie & Willow Sophia.
Quote
Refresh comments list