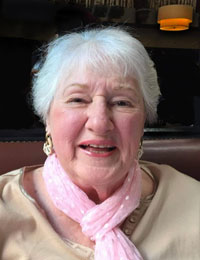 Margaret passed away at the age of 92 in her home in Chelsea, Michigan on Jan. 18, 2021 surrounded by her family after a battle with cancer. She was born on July 29, 1928 in Detroit, Michigan to Harold Carleton Walborn and Thelma Louise (Poch) Walborn. Margaret was much loved by her family and known for her great laugh, her sense of humor and her generosity. She was very creative and always encouraged anyone with artistic talents. Margaret loved decorating, oil painting, sewing and travel, but most of all she loved being with her family. She was proud of her heritage as a direct descendent of Governor Winslow of the original colonies as well as her German ancestry on her mother’s side.

Margaret attended college at the University of Michigan and graduated from Ross School of Business. She went on to work at U of M as an administrator in the College of Engineering and the Literature, Science and Arts College in the Political Science Department for many years. She had formerly been an accountant for the Ann Arbor Y as well as being a co-owner of several businesses in Ypsilanti, Wayne, and Detroit. Margaret was a member and former vice-president of Zonta International Ypsilanti Chapter. She volunteered at the Chelsea Community Hospital for over 10 years and served on the board for the hospital Gift Shop.

Margaret is survived by her son, Bruce W. Cousins (Deborah Aquilina) of Chelsea, and her daughter, Sheree D. Roberts (Thomas) of Whitmore Lake. She is also survived by her 3 granddaughters, Emily Louise Shafer Tull (Jon) of Pasadena, Elizabeth Ashley Shafer (Joseph May) of Whitmore Lake, Megan Ann Turriff and great-grandson, Landen of Grand Rapids; and her brother, Brian W. Walborn (Ruth) of Alpena. She was preceded in death by her parents, and her brother, Bruce C. Walborn of Hart.

She was very close to her family and will be dearly missed.

A memorial service will be announced at a later date. Arrangements by Cole Funeral Chapel.

You may use the form below to share a memory or leave a message for Margert's family.  Please allow up to 24 hours for us to review and post your message.

I will always cherish the fun times I had with your Mom and Marie. Your Mom had a fantastic personality and an infectious laugh that will live on in my memory. She was a wonderful lady and I will miss her a great deal. Rest in peace dear friend and give " Mother" Marie a kiss for me!!!