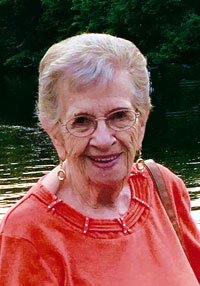 of Chelsea, MI, formerly of Dexter, age 88, went to be with the Lord Saturday, January 9, 2021 at her home in the Pines. She was born June 2, 1932 in Waterloo Township, the daughter of Homer Edward & Lela May (Green) Parks.  Mary graduated  from Stockbridge High School in 1950. She was a bookkeeper at Ann Arbor Bank, Argus Camera, Ann Arbor Circuits and Bookcrafters in Chelsea. Mary was a member at St. Andrews United Church of Christ in Dexter since 1966, where she taught Sunday School. Mary and Alvin enjoyed bowling at Dexter Bowling Alley and Belmark, and also enjoyed square dancing. She was an avid card player.
On November 3, 1951, she married Alvin Albert Rettig in Waterloo Methodist Church, and he preceded her in death in 2006.  Survivors include her son, Tony (Karin) Rettig of Dexter; a daughter, Linda (Eric) Prinzing of Grass Lake; a sister, Helen Lake of Melborne, FL; 5 grandchildren, Melanie Young, Jessica Nichol, Lindsay Rettig, Erica Rettig, Lela Prinzing; 7 great-grandchildren, and many nieces and nephews. She was preceded in death by her siblings, Mildred Lantis, Gladys “Sal” Murray, Robert Parks, Don Parks, Catherine Brauer, John Parks, Dorothy Walbrook, and Richard Parks.
Burial has taken place at St. Andrew's Cemetery, Dexter. A celebration of life was held July 11, 2021 at the UAW Hall in Chelsea. Memorial contributions may be made to St. Andrews United Church of Christ, 7610 Ann Arbor St, Dexter, MI 48130 or Arbor Hospice, 2366 Oak Valley Dr, Ann Arbor, MI 48103. Arrangements were entrusted to Cole Funeral Chapel in Chelsea.
Click here to watch the recording of Betty's graveside service
You may use the form below to share a memory or leave a message for Mary's family. Please allow up to 24 hours for us to review and post your comments.