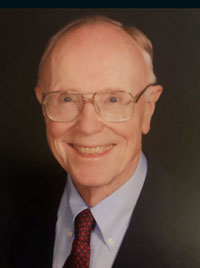 of Chelsea, formerly of Ann Arbor and Bloomfield Hills, age 86, passed away peacefully on Saturday, January 2, 2021 at his home in Chelsea, MI with his family at his side. He was born June 29, 1934 in Howard City, MI, the son of Floyd M. & Phoebe E. (Harmer) Place.

Richard grew up in Flint and graduated from Northern High School in 1952. After high school, he studied at Flint Junior College before transferring to MIT where he earned a Bachelor of Science Degree in Engineering. Following graduation he served as an officer in the US Navy. During this time he also received a Masters in Engineering Administration degree from George Washington University and married the love of his life Meryl D. Johnson in 1959.

After government service, Richard worked as an Engineering and Product Planning Executive at Ford Motor Company for over 30 years. He also served as Senior Managing Director of the Mazda Motor Corporation in Hiroshima, Japan for 4 years in the mid-1980s.
Richard was an avid traveler, outdoorsman, and private pilot. He and his wife took many adventures to Alaska, Africa, Australia, New Zealand, and beyond. He was a member of the Westside United Methodist Church in Ann Arbor.

He is survived by Meryl, his wife of 62 years. Other survivors include his two sons, Mark (Michelle) Place of Brighton, MI, John (Emi) Place of Tokyo, Japan; grandchildren Tomoru and Sara, and brother Dudley (Lorna) of Grand Blanc, MI.

Due to Covid, memorial services will be held at a later date. Memorial contributions may be made to the United Methodist Retirement Communities Foundation. Arrangements were entrusted to Cole Funeral Chapel in Chelsea.

You may use the form below to share a memory or leave a public message for Richard's family. Please allow 24 hours for us to review and post your comment.