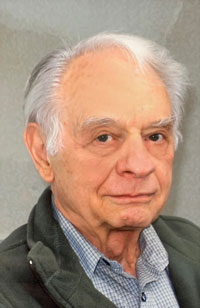 Joe Griffin Eisley, age 92, died Wednesday, December 30, 2020, at Silver Maples of Chelsea Retirement Neighborhood. He was born on April 7, 1928, in Auglaize County, Ohio, the son of Harold Samuel and Velma Ruth (Griffin) Eisley.  After graduating from Spencerville (Ohio) High School in 1946, he joined the U.S. Army and was stationed in Daegu, South Korea.  In 1948, he entered Parks College, St. Louis University, going on to receive his Master of Science and Ph.D. degrees from the California Institute of Technology.  In 1956, he married Marilyn Fleck in Pasadena, California, and they moved to Ann Arbor where he began a 42-year career as a Professor of Aerospace Engineering at the University of Michigan. In addition to his teaching duties, he spent 14 years as an Associate Dean in the College of Engineering.  During this time, he was involved in revising the engineering curriculum and in developing programs to encourage women and minorities to study engineering.  His proudest accomplishment at the university, however, was to see so many of his former students succeed in their engineering careers.

Joe was a beloved teacher to his many students from all over the world. Joe was a prolific traveler, visiting all seven continents and documenting his adventures through his excellent photography skills.  He was also an avid woodworker, building beautiful furniture and creating beautiful boxes and bowls.

He was a great husband and father, rarely missing any activity in which his children were involved and always taking time to play catch after school no matter how tired he was after work.  He was a good and modest man who never ceased to be amazed that his life took him from driving horses on a farm without electricity to seeing his former students orbit the earth and walk on the moon. Joe was preceded in death by his wife of 55 years, Marilyn.  Survivors include his son Paul Eisley and Paul’s wife Ineke Rawie of Seal Rock, OR, and his daughter Susan Eisley and her husband Shengzhang Tang of Pittsfield, MA.  He is also survived by his nieces and nephews and their children, all of whom he loved dearly, and his many friends and former students, whose lives he made brighter.

A memorial service will be held at a later date.  His ashes will be interred in the memorial gardens of the First United Methodist Church of Ann Arbor.  Memorial contributions may be made to the Joe Eisley Employee Scholarship Fund at Silver Maples. Arrangements were entrusted to Cole Funeral Chapel in Chelsea.

You may use the form below to share a memory or leave a public message for Joe's family. Please allow 24 hours for us to review and post your comment.

#2 Belinda Worley 2021-01-11 18:56
Professor Eisley will be so dearly missed. I feel so privileged to have had him in my life. He was nothing short of extraordinary. He always made me smile, always made time for me, always showed interest in not only my education, my career, but in me as a person. I cherish every moment I had with him. To his family, thank you for the amazing obituary. He always lit up when he talked about you. Truly a kindred spirit. Love to the Eisley family. Belinda Worley
Quote
#1 Shawn Personke 2021-01-05 06:59
To the amazing Joe Eisley's family ~ you've written a beautiful obituary. He was a great storyteller, too, with a wonderful sense of humor. His travel presentations at Silver Maples were not to be missed! He was indeed, "...a good and modest man." I am so sad to hear of his passing, but so happy that I had the chance to know Joe. Hugs to you all. ~ Shawn Personke
Quote
Refresh comments list