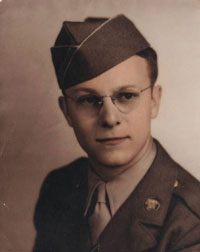 Age 96, died Tuesday, December 29, 2020 at Chelsea Retirement Community. He was born in 1924 in Wymore, Nebraska, the son of Arthur and Althea (Beldon) Hiner. Bill was a member of the Orchard United Methodist Church, Farmington Hills.

Bill has been married to Eleanor Ann Hanley for 61 years, and she survives. He is also survived by one son, James Hiner (Melissa) of Ann Arbor; and two grandchildren, Margaret Hunt and Robert Hiner. He was preceded in death by his daughter, Margaret “Peggy” Hiner of Atlanta, Georgia, and his brother, Clyde Jr. Hiner of Wymore, Nebraska.

Bill was a graduate of The University of Nebraska, and Detroit School of Law. He served in the Army during WWII. He enjoyed a successful career with Ford Motor Company, and later with American Natural Resources. Bill enjoyed golf, bowling, and traveling with his family. He always had a great sense of humor, and witty comments at the ready.

A private graveside service was held at the North Farmington Cemetery in Farmington Hills, Michigan. A memorial service will be held at a later date. In lieu of flowers, the family kindly requests that donations be made to the United Methodist Retirement Communities Foundation. Bill was a long-time resident of Chelsea Retirement Community and greatly appreciated the care and love he received from his neighbors and the staff. Memorial gifts can be sent to: UMRC Foundation, 805 W. Middle St., Chelsea, MI 48118 or online at https://umrc.com/umrc-foundation/. Arrangements were entrusted to Cole Funeral Chapel in Chelsea.

You may use the form below to share a memory or leave a public message for Bill's family. Please allow 24 hours for us to review and post your comment.